Cannabis and Its Untapped Therapeutic Benefits for Women’s Gynecological Health

Learn all about how cannabis can help women manage the symptoms associated with menstruation and menopause, as well as naturally boost their sexual health.

While women have historically been more hesitant to embrace cannabis, there is an array of medically legitimate reasons why they may want to incorporate it into their health routine.

Women’s bodies are regularly changing, presenting a unique set of health challenges from menstruation, menopause, and hormonal imbalances. Women using cannabis to deal with symptoms and health issues is not new, and yet cannabis remains highly untapped by many women who are either unaware of its benefits or hesitant to try it due to the lingering stigma around marijuana use.

Keep reading to learn about the various ways cannabis use can benefit women and their gynecological health.

History of Cannabis Use for Female Medical Conditions

Women have been using cannabis for gynecological health purposes for thousands of years, according to renowned cannabis researcher Dr. Ethan Russo.17 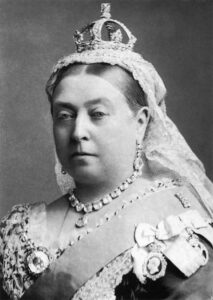 The earliest references to cannabis use for female health issues can be found in ancient Mesopotamia, when women would blend cannabis with mint and saffron to create a botanical agent called Azallú to address menstrual pain.

Ancient texts in China, Persia, Israel/Palestine, and Syria all recommended cannabis for an array of complaints that impact women, including painful cramps, bloating, abnormal bleeding, menopausal symptoms, and urinary tract infections. In ancient Europe, women helped ease their contractions during childbirth by grinding cannabis into honey and introducing the botanical substance vaginally.

In the 1800s, Queen Victoria used cannabis likely in a liquid tincture form to relieve her menstrual cramps. Years later, in the mid 1900s, Victorian doctors even promoted cannabis tinctures during menstruation.

Cannabis elicits its effects on the body by interacting with the endocannabinoid system, or ECS. The ECS is a major self-regulatory network that is responsible for regulating a wide array of functions, such as mood, metabolism, appetite, immune system response, pain response, and more. The endocannabinoid system also plays an integral part in female reproductive processes.

Sometimes, however, the ECS can become deficient in endocannabinoids. This can cause endocannabinoid system dysregulation, leading to an imbalance in the body and eventually health issues.

Studies have even shown that this interaction, between cannabis-derived cannabinoids and the ECS, can be helpful for conditions that have been linked to ECS dysregulation, including multiple sclerosis, Alzheimer’s disease, and amyotrophic lateral sclerosis (ALS).14

What this suggests for women’s gynecological health is that any reproductive issues they have that are related to a deficiency in endocannabinoids may also be benefitted by cannabis use and the absorption of cannabinoids.

Benefits of Cannabis for Menstruation Symptoms

Most women experience symptoms before and during their periods, including abdominal cramps, muscle aches, nausea, diarrhea, fatigue, and spasms. A growing number of women are using cannabis to address these symptoms, which can vary in intensity and sometimes be debilitating.

While research on cannabis’s effects on period pain are lacking, there is a solid body of evidence on the pain-relieving properties of cannabis. Cannabis has also demonstrated anti-inflammatory effects, which can contribute to lowering pain related to inflammation of the uterus. In some states, lawmakers and advocates are even pushing to add menstrual pain (dysmenorrhea) to the list of conditions that qualify for medical marijuana.

For women who suffer from endometriosis, cannabis may also offer relief. Findings in a small collection of studies reveal that the sometimes-disabling pain related to endometriosis can be eased with cannabis.11,12

Cannabis’s effectiveness for treating menstrual pain is likely related to cannabinoids and their interactions with the endocannabinoid system. Researchers have found that there are cannabinoid receptors located on many cells throughout the uterus, suggesting that the ECS plays a role in the management of dysmenorrhea-related pain.12 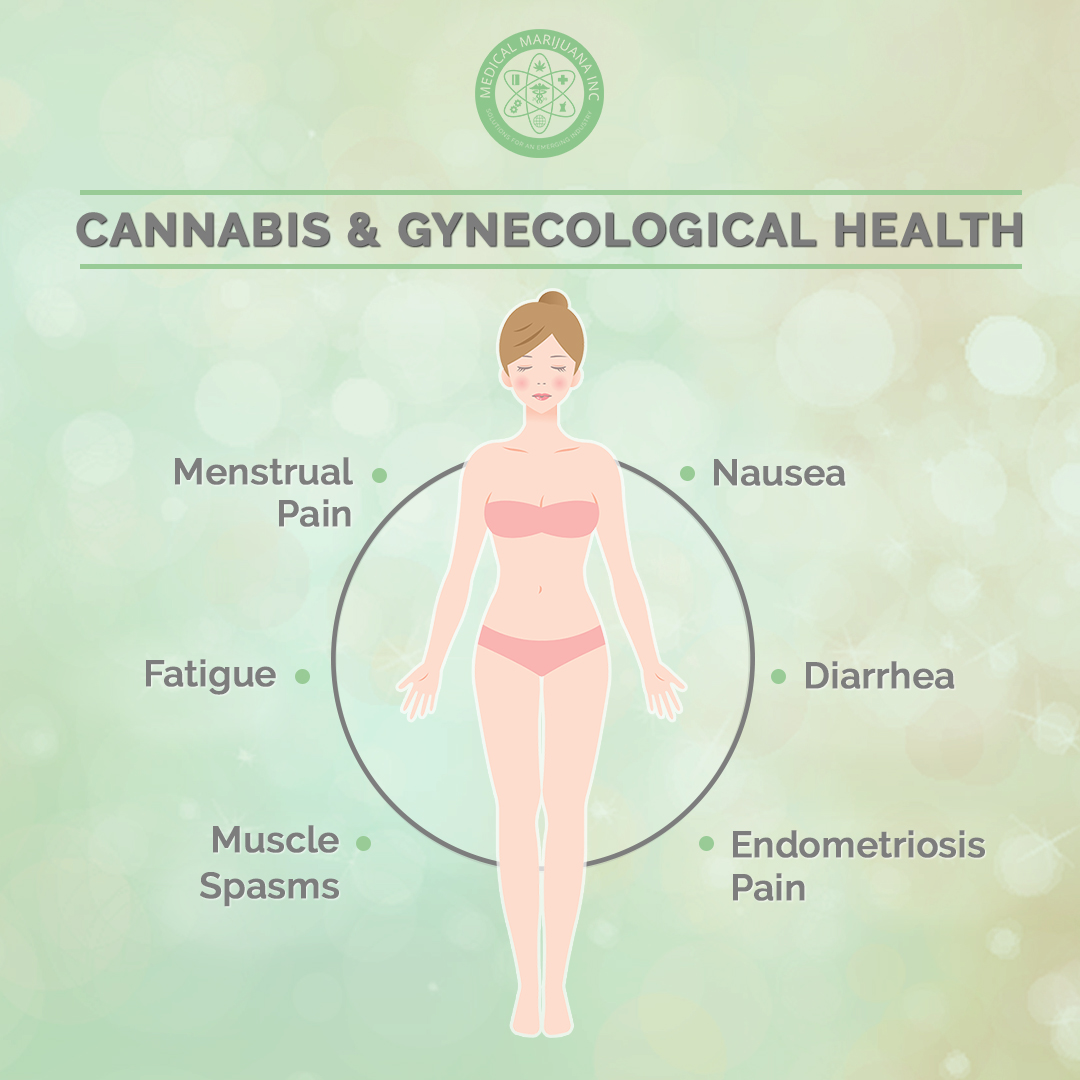 Cannabis can also effectively suppress nausea and vomiting, which are very common for women during menstruation. While it appears that no studies have yet investigated marijuana’s anti-nausea properties specific to a woman’s period, the study of cannabis’s ability to ease nausea and vomiting is robust.

Using cannabis may also help menstruating women treat or relieve diarrhea and the gaseous sensations in the stomach. Again, research into cannabis for period-related diarrhea is lacking, but medical marijuana is commonly recommended for irritable bowel syndrome, a long-term disorder that causes bloating and diarrhea.

Benefits of Cannabis for Menopause

A woman’s body experiences a dramatic shift during menopause, but cannabis may make the challenging transition easier to manage. Women going through menopause may experience an array of side effects, including hot flashes, mood swings, pain, fatigue, osteoporosis, and insomnia. For some women, juggling all these effects can also lead to anxiety or depression.

Research exploring the benefits for menopausal women is scarce, but scientists and medical experts do have a modern scientific understanding of how cannabis may prove useful. The endocannabinoid system and estrogen are closely linked, and some preliminary research even suggests that early-onset menopause may be related to endocannabinoid deficiencies.10

For menopausal woman experiencing insomnia, a large number of studies have shown cannabis can improve the quality and duration of sleep. One particular cannabis-derived cannabinoid, tetrahydrocannabinol (THC), has shown to reduce the amount of time it takes to fall asleep and the number of awakenings throughout the night.2 Consuming higher levels of THC may also have a cooling effect on the body, which could prove beneficial for managing hot flashes.16

Research shows a well-operating endocannabinoid system can help suppress mood swings. At a time when so many dramatic shifts are occurring, the use of cannabis during menopause may help bolster the ECS’s abilities to keep functions balanced, reducing the risk of depression.

Cannabis’s support of the ECS can also help encourage better bone regulation to reduce the risk of osteoporosis, a condition more common in postmenopausal women.1

Polycystic ovary syndrome, or PCOS, is a hormonal disorder that impacts women of reproductive age. An imbalance of reproductive hormones leads to excess androgen levels, causing problems in the ovaries and sometimes irregular menstrual periods. The exact cause of PCOS is still unclear, however, medical experts believe that excess insulin produced by the pancreas may be responsible for abnormally high levels of androgen.

While there is no known cure for PCOS, anecdotal information and limited research suggest that using cannabis to support your endocannabinoid system may help prevent and treat PCOS.

There is some evidence implicating dysfunction of the endocannabinoid system in polycystic ovary syndrome.4 Researchers also have found that an ECS dysfunction may be linked to high insulin levels in women with PCOS.7 This could mean that endocannabinoid therapy, like cannabis-derived cannabinoids, may be useful, but research in the area is still far lacking.

Using marijuana can also help women manage the symptoms often associated with PCOS, like abdominal pain due to the development of cysts, as well as depression. Cannabis’s influence on the ECS has shown effective at treating all types of pain and demonstrated it can boost mood.3,5

Cannabis and Its Potential Role in Boosting Women’s Sexual Health

Cannabis may also help women enhance their sexual health.15 A recent study in the journal Sexual Medicine found that nearly 7 of 10 women who used marijuana before sex had a more pleasurable experience. Using cannabis before sex also boosted sex drive in over 60 percent of women and more than half experienced an increase in satisfying orgasms.9

While researchers are still unsure why marijuana use appears to improve sex for women, some believe it has to do with cannabis’s effect on stress and anxiety, which may make a woman more confident.

Most evidence around why marijuana positively affects women’s sexual experiences points to the influence of cannabis on the ECS. Cannabinoid receptors are found in areas of the brain that are responsible for balancing hormones that play a role in sex. Plus, women’s sexual arousal has shown to increase when there are higher concentrations of cannabinoids in their systems.8

Researchers have also found a positive association between marijuana use and sexual frequency in both women and men.13 In fact, data suggests that the more cannabis is consumed, the greater the sexual behavior and arousability.6

More on Women and Cannabis

These are just some of the many potential medical uses of cannabis. You can learn even more about cannabis and how it supports the endocannabinoid system of both women and men by visiting our education page, and keep up with the latest cannabis study findings through our scientific research page.