A new poll finds a majority of Americans favor recategorizing cannabis offenses to the same level as traffic violations.

A 2019 survey finds strong support for changing the punishments for cannabis offenses to a lesser charge.

The Cato Institute, a public policy research organization, recently surveyed a sample of American adults by asking, “Would you favor or oppose recategorizing drug offenses from felonies to civil offenses, meaning they would be treated like minor traffic violations rather than crimes?”

The results show that 55 percent are in favor of decriminalizing cannabis, while 44 percent oppose it. 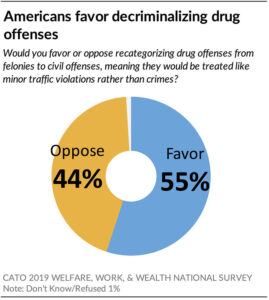 “Decriminalizing drugs would reduce the number of people who have difficulty finding employment because of a nonviolent drug offense,” the report’s authors wrote.

The Cato report found while the majorities of Democrats (69 percent) and Independents (54 percent) support decriminalizing cannabis offenses, most Republicans (59 percent) oppose this change. The bipartisan gap can also be found in the latest Gallup poll and in a recent survey from the Pew Research Center.

In both the Gallup and Pew surveys, the majority of respondents supported legalizing marijuana with the strongest opposition coming from Republican voters. However, all three surveys found growing support for legalization in all voting segments.

The Cato Institute in collaboration with YouGov created and conducted the Cato 2019 Welfare, Work, and Wealth National Survey. Online responses were collected by YouGov from March 7 to March 13 from a representative national sample of 1,700 Americans 18 and over.

Recent research has shown that not only do Americans want decriminalization, but strong support has been found for legal access to marijuana. A recent Quinnipiac University Poll found that six out of ten Americans favor cannabis legalization.

Since 2012, the nationwide Quinnipiac surveys have continued to find growing support for legal marijuana. In addition, the poll found that 63 percent of American voters support expunging criminal records for cannabis possession. Outside of Republican voters, the poll revealed support from every other political party, gender, education, age and racial group for clearing low-level possession and use offenses.

In a 2018 Gallup poll, even the majority of Republican voters (53 percent) showed a preference for recreational cannabis legalization. According to the poll, 66 percent of U.S. citizens over the age of 18 believed the use of marijuana should be made legal.

The 2018 results marked the sixth year in a row that support for marijuana legalization has increased, up from 58 percent in 2013. The survey received the highest support for cannabis legalization since Gallup began surveying Americans on cannabis in 1969, when only 12 percent of voters supported legalization.

Where is Marijuana Legal?

Currently, federal law states cannabis is an illegal substance under the Controlled Substances Act, despite the fact that more than half of the states in the country have established some form of cannabis legalization.

Find out more about shifting attitudes on cannabis and the nation’s expanding industry by visiting our news page.